“It’s time to buzz the tower…” “Splash the Zeroes…” American Naval aviation is familiar around the world and not just because of Hollywood.

The United States’ aircraft carrier fleets are a major part of that country’s force extension and a vital part of NATO’s commitment to the defence of its members.

Carrier Air Wings are nothing without their aircraft and this comprehensive book, the first in a series, details the operations of US Navy Carrier Air Wings from 1975 onwards. This first volume covers the Grumman F-14 Tomcat, Vought F-8 Crusader and McDonnell F-4 Phantom II.

Such an abundance of information as appears in the book can only come from a labour of love. The author had access to official US Navy records, some specially declassified for his research, and key inputs from the likes of the Tailhook Association and magazine, The Hook.

From “hot” moments during the Cold War, to the Iraqi invasion of Kuwait and on to the subsequent 2003 Iraq War US Navy aviation has played its part. Here we can find out the stories behind the headlines. Individual aircraft are identified and there are detailed histories of each airframe. This is coupled with a comprehensive history of the air wings themselves and a good overall review of operations and deployments.

While setting up for an intercept, an AA-2 ‘Atoll’ air-to-air missile was fired at the F-14s. This triggered the rules of engagement which allowed the American aircraft to defend themselves. Directed by a Grumman E-2C Hawkeye and using AIM-9 Sidewinders the F-14s shot down both Sukhois, claiming a ‘kill’ each. Both Libyan pilots ejected.

Crutch’s book allows us to identify the individual aircraft involved. BuNo* 160403, flown by Commander Hank Kleemann, is now preserved at the Midland Air Museum, Texas. BuNo 160390, flown by Lieutenant Lawrence Muczynski during the Gulf of Sidra incident, had a sadder ending. On 25 October 1994, it was on approach to USS Abraham Lincoln being flown by Lieutenant Kara Hultgreen, the first female carrier-based pilot in the US Navy. An engine failure, caused by a compressor stall due to excess yaw, resulted in the Tomcat crashing into the sea, killing Hultgreen. Her radar intercept officer (RIO) ejected and survived.

Operations Evening Light and Eagle Claw jointly formed the attempt in 1981 to rescue hostages from the American embassy in Tehran, Iran. Fighter aircraft from the US Navy were on standby to perform combat air patrols deep into Iranian territory during the mission. Pre-revolution Iran had been the sole export customer of the F-14 Tomcat and had around 80 in service. US Navy aircraft selected for the operation received special identification markings to minimise the likelihood of ‘friendly fire’ incidents in close combat.

These two operations from a single year show the importance of the Carrier Air Wings to American military and diplomatic manoeuvres around the world. In this book we can find the stories behind the Carrier Air Wings involvement in the second Gulf of Sidra incident in 1989, the 1986 bombing of Libya – Operation El Dorado Canyon, both Gulf Wars, and the numerous encounters with Soviet forces during the Cold War – especially the probing of the fleets by Soviet bombers and reconnaissance flights.

Hollywood gets a mention too, with coverage of the US Navy co-operation with the movies The Final Countdown and blockbuster Top Gun.

It is difficult to overemphasise the great level of detail in this book. Want to know which squadrons were assigned to which air wings at any given point? Which air wings were deployed on which carriers? Trying to identify the history of an individual Tomcat, F-4 or Crusader? Squadron designations, nicknames, callsigns or insignia? It’s all here. There are a lot of high-quality colour photographs throughout, too.

Future volumes will cover other US Navy aircraft in the same detail. Volume II will feature Douglas A-3 Skywarriors, North American A-5 Vigilantes, Grumman A-6 Intruders, Grumman EA-6 Prowlers and Vought A-7 Corsair IIs.

Are there any niggles? Well, an old-fashioned type like me would have liked to have seen a hard copy instead of just an e-book, but production expenses and an effort to save the planet make the electronic choice understandable. Another little grumble is not the author’s fault. The military, and the American military in particular, love their initials and acronyms. Trying to establish what FITWINGLANT or CINCPACFLT refer to can interrupt the flow of the author’s well-written prose.

But these are nit-picks in what is an excellent reference work. Aviation geeks, military historians and aircraft modellers will all find it useful. I found it a fascinating, highly-detailed insight into US Navy air operations during an exciting four decades.

To buy the book, please click on the cover picture below. 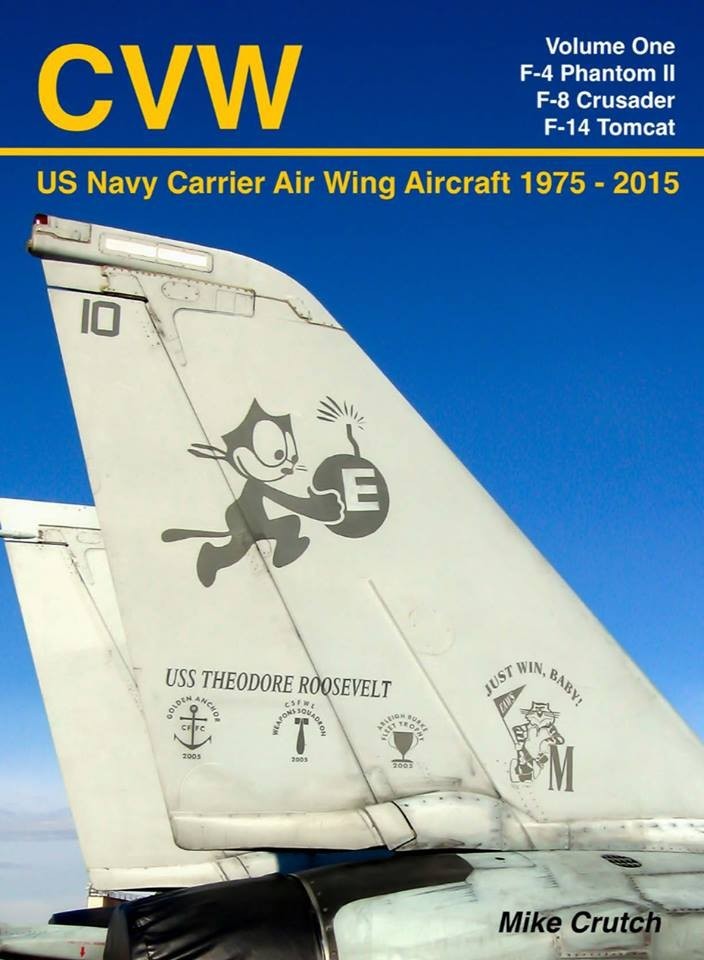 *BuNo = Bureau Number, the unique number allocated to each airframe by the US Navy.