Situated adjacent to the M25 motorway, the museum is easily accessible by road. Public transport links are limited but a local bus stops nearby and is on a route from Potters Bar and High Barnet railway stations. There is good parking. Standard admission is GBP12 with the usual concessions, including for emergency workers and armed forces personnel.

The museum is well laid out and exhibits are informatively labelled. There is a gift shop and refreshments are available.

A key attraction of the de Havilland Aircraft Museum is the ability to see close up the active restoration of historic aircraft and artefacts. This is very much a working museum. Initially started with a DH98 Mosquito, there are now three of the wooden night-fighters preserved at the site.

There is a very wide representation of de Havilland types from DH53 Humming Bird, through the entry to the jet age and ending with the last Hatfield-built airliner, the British Aerospace 146.

These are some of the key exhibits:

The Mosquito entered service in 1941. Initially conceived as a light bomber, the wooden aircraft was fast for its time and saw combat in several roles. Prototypes were built at Salisbury Hall, adjacent to the museum site, then transported to Hatfield for their first flights. Over 7,000 were eventually built. The museum’s collection includes one of the three prototypes alongside three other production examples.

De Havilland’s Comet was the world’s first jet airliner. Unfortunately, being at the forefront of innovation came at a price. Three Comets were lost in the space of a year after initially entry into service. The type was grounded and the museum’s example, which had been operating in France, was used for tests at Farnborough during the investigation into the disasters. There is also another Comet 1A nose section preserved.

The unique design of the Sea Vixen was based on the earlier Vampire and Venom. Powered by two Rolls-Royce Avon turbojets, it was designed for carrier operations and saw service in the Middle East, including the withdrawal from Aden, and in Africa. The museum’s example is in the colours of 899 Naval Air Squadron, which served for a while on HMS Eagle.

Although more commonly known in production as the HS.125 this early business jet was a de Havilland design. The museum’s example is the second prototype, and first production example, and was constructed at Hatfield. Early examples were powered by an ear-shattering pair of Bristol Siddeley Viper turbojets.

This 1950s four-engined airliner could seat 17 people and was designed to cope with unprepared airports and landing strips in remote areas. Accordingly, it had sturdy undercarriage and reliable, simple to maintain engines. The type saw service all over the world and 150 examples were built.

G-AOTI was operated until 1982 by Rolls-Royce into whose colours it has been repainted for display.

De Havilland scored several firsts with the Trident including world’s first trijet and first airliner with full Autoland capability. The initial design was hampered by being tailored to the requirements of British European Airways (BEA), the first and largest customer. This delayed production and meant that export orders were limited. Just 117 Tridents were built, compared to over 1,800 of rival Boeing 727. The museum has preserved the forward section of Trident 2E, G-AVFH.

If you can’t get to the museum, or want to be prepare for your visit, there is a wide range of books, models and souvenirs based around de Havilland aircraft and the Mosquito in particular. Click the images below for more. 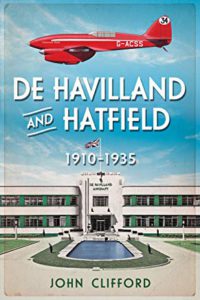