Bromma to Arlanda. This article completes my January visit to Scandinavia – part one is here.

Stockholm Bromma airport was the main airport for the city until Arlanda was opened in the early 1960s. It is still Sweden’s third busiest airport.

Like many early airports the surrounding land has been built on and further expansion is impossible. Following a local election win for a Red-Green coalition in 2014, the airport has been slated for closure to be built on. Reports are conflicting though. Some say the airport will close in 2022, others that Swedavia hold a contract until 2038.

For now, Bromma offers a selection of regional airliners and business jets for the enthusiast to see.

We left our hotel and drove along Highway E4 to the outskirts of Stockholm. Some old-fashioned navigation found us on the South side of Bromma airport with a recycling centre on one side of the road and a medieval burial ground on the other. Linta Gardsvag is what you want to put in your sat-nav.

When you’ve parked your car, cross the road at the pedestrian crossing. You’ll see a path leading up into a wooded area. Take the path and aim towards the more open, higher ground. You’ll find yourself on top of a rocky outcrop with a fine view of the whole airport in front of you. If runway 30 is in use, you’re in luck. It’s a great spot for photography.

The dominant operator at Bromma is BRA Braathens Regional Airlines with a wide range of domestic and regional flights. Other scheduled services are by British Airways to Aarhus (operated by Sun-Air) using Dornier 328JETs, Brussels Airlines to Brussels using Airbus A319s (until recently Sukhoi Superjets were used on the route) and Finnair to Helsinki (operated by Nordic Regional Airlines) using ATR 72s.

There is also a busy general aviation operation at Bromma including executive jets, flying clubs and a flight school.

After a busy morning photographing aeroplanes at Bromma (it’s a hard life…) we headed back to Arlanda. Stockholm’s main international airport opened in 1962 to supplement the cramped Bromma, which was unable to expand to cope with the new jet age.

Today, Arlanda has three runways and four terminals. There is no problem taking photographs around the airport, so long as you follow the usual common-sense rules. There is a dedicated ‘spotting hut’ near the junction of route 273 and Smuttan. This gives views of both arrivals and departures on runway 19L, together with views of traffic on runway 26. Sky City is a shopping area and food court in the main terminal area. It is accessible by the general public and has views of the main parking areas.

The pictures which follow were taken on the approach to runway 26. The track seemingly doesn’t have a name, but it is paved and here are the co-ordinates: LAT 59.6631 LON 17.9852.

Early sunset is a disadvantage of visiting Stockholm in January, so it was soon time to head to the terminal for our flight home. This time travelling in BA’s Club Europe (business class) cabin. Check in and security were negotiated, and it was off to the lounge. BA uses a contract lounge – the Menzies Aurora Lounge – at Arlanda. It was uncrowded and easy to find a quite comfortable spot. On the disappointing side, the food and beverage options were limited. This wasn’t a huge deal as our return trip in row 1 of one of BA’s Airbus A321s included a full meal from the airline’s enhanced short-haul menu. An on-time arrival into Heathrow and a bus ride home rounded off a pleasant couple of days in Scandinavia. 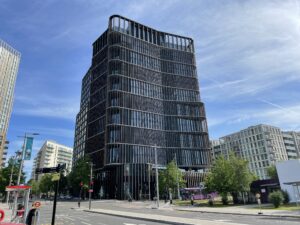